There is a lot of contradiction on how divisional charts are used in Jyotish.  Some astrologers only look at the sign a planet is placed in.  They then look at the lord of that sign and see if it is strong or weak in the Rasi chart.  However, they claim that Yogas and Aspects are not to be used in divisional charts.

This is one section that I strongly disagree with.  And I abide by my teacher, James Kelleher, in the way he uses divisional charts.

Let us take an example at why we analyze a divisional chart just as we analyze a Rasi chart, including Yogas and aspects.

We will use Jackie Kennedy Onassis’ chart.  Her chart is a prime example of using Yogas in divisional charts.

She has a Balarishta Yoga in her Navamsa chart (D-9).  A Balarishta Yoga signifies early death, and it is when the Moon is in a Dusthana house (6th, 8th, or 12th) and it is aspected by natural malefic planets.

In the Navamsha chart she has Tauras lagna, with Moon and Saturn in the 12th house, aspected by Mars in Libra.  Saturn is debilitated in the sign of Aries in her divisional chart, worsening the effect of the Balarishta.

Here are her chart details: 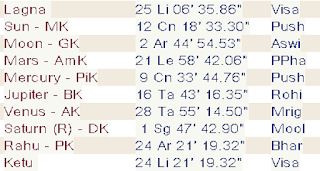 Jackie Kennedy was running the Mahadasha of Moon-Rahu during the assassination of the President John F. Kennedy, her husband at the time.  If you also notice in your software program, Moon is sitting in the Nakshatra of Bharani in the D-9.  Bharani has for its symbolism Yama and the power to take things away to the world of the spirits.  Her husband was literally taken away to the world of the spirits (Bharani), as a result of the Balarishta Yoga, during her Moon Mahadasha!

How about other yogas, and their usage?  If there is a Dhana Yoga for wealth in the Navamsha, then it could indicate either that the native will marry someone who has wealth, or her own financial situation will improve after marriage.  The effect will be more amplified during the dasha/bhukti planetary cycles of such Dhana Yoga planets, or the periods of planets conjoined the Yoga-forming planets.

Another example is the Geja-Kesari Yoga.  Most Vedic astrologer actually misuse this yoga and take away all it’s credit if it is in any way afflicted.

For now let us use this yoga as an example in divisional charts.  Geja-Kesari Yoga is formed when Jupiter is in an angle from the Moon.  That is the most basic interpretation, and we will use it as such.

This is a public relations yoga.  It indicates fame, but not only fame.  It also indicates that the person knows how to package and present material very well.  The person having this yoga may not be him or herself famous, but they may work in the marketing industry helping to package and present the product they are trying to sell.  People with this yoga know how to put a positive spin on things and are great marketers.  They may also work with people who are famous, and they know how to put a positive spin in presenting the person to others.

But this yoga is used in other ways as well.  It is a public yoga.  Moon stands for the public, and Jupiter stands for expansion.  So this yoga also indicates get-togethers of various kinds.  This could include a family reunion, or any kind of public reunion.  Moon stands for family and people in general.

So if you are seeing this yoga in the Navamsa chart, then during the bhukti of one of the planets involved or conjoined the planets in this yoga, there may be a reunion taking place in the marriage.  There may be a party being hosted during that time, in which many family and friends get together, etc.  Or the partner may have a situation in which he is presenting something to the public and it is accepted in a positive light.

If it is seen in the D-12 chart of parents, it could indicate the parents are going to be involved in a family reunion or some form of public activity during this time.

If one of the planets is afflicted by a malefic planet, then the yoga still takes place but there will also be negative results seen.  So if it is seen in the Navamsa chart, and it is afflicted, then the husband could be involved in a public matter which ruins his reputation during one of the planet’s cycles.

It could also indicate giving some fame or notoriety in the beginning, and then a something negative happens which ruins the person’s reputation a bit.  If it is in a divisional chart, then the family reunion or other public meeting may have some challenges involved, etc.

The point is that if there is a Geja-Kesari Yoga in a chart, you don’t just throw it out the window.  It will give its results anyway, but in a greater or lesser form depending on its strength.

Maybe the person does not become famous like Michael Jackson, but they still achieve some notoriety in their particular career field, or their particular domain.  It nevertheless gives the person the ability to package and present well for marketing purposes.

Therefore, do not ignore yogas and aspects in divisional charts.  Pay close attention to them and you will get a lot more from analyzing a chart than if you only stick to the Rasi chart.

If you want to take it a bit further, include the Nakshatras the planets are situated in the divisional charts as well.  If there is a planet in Magha Nakshatra in the 4th house of the D-4 of property and vehicles, then be sure this person may acquire property, or do well in Real-Estate during the period of such a planet.  Magha Nakshatra stands for the Throne Room.  So it implies property of some sort.

Another example is Shatabhisha Nakshatra.  If in the same D-4 chart there is a planet’s cycle running sitting in this Nakshatra in a prominent house of that divisiona chart, such as the Lagna, the 4th, or angular in that chart and in that Nakshatra, then the person may acquire property that is close to water during that period because water is related to this Nakshatra’s symbolism.  The same goes for other Nakshatras with the symbolism of water.

If in the D-6 chart of health/diseased if there is a planet sitting, for example, in Shatabhisha Nakshatra, then that person may begin visiting many physicians for a physical condition, or they may start looking into alternative medicine during that planet’s cycle.  The same goes for Aswini Nakshatra.

In the 2nd house indicates food and other things we put in our mouth.  If in the same D-6 chart there is a planet sitting in the Nakshatra of Ashlesha, which has for its symbolism the power of poison, it could indicate that the person starts taking more medicine during this time, or other sorts of things related to drugs.

It is therefore important to know the symbolism of the Nakshatra to get these sorts of juicy details in a birth chart.

Therefore, do not exclude yogas, aspects, house placements, or Nakshatras of the divisional charts.  They are extremely important and will add a whole new dimension to your Jyotish skills.  Best of luck!

Monica is a Vedic Astrologer since 2009. She has a B.A. in Psychology. Her deep passion for the spiritual and occult side of life has led her on a path to go deeper into the mysteries of life, and to seek the underlying causes of phenomena and events. This is what led her down the path of Vedic Astrology (Jyotish). She began by studying Western Astrology first, but it still was not enough. After about three months of studying Western Astrology she came across a book by James Braha on Western Astrology, but the back cover said he actually practiced Hindu Astrology. She became curious about this different astrology she had never heard about and immediately called him and ordered his books. He sent her her chart to study alongside her new Hindu (Vedic) Astrology books. The fateful day upon receiving the book titled, "Ancient Hindu Astrology for the Modern Western Astrologer"she became so absorbed on Vedic Astrology, that she never looked back. It explained circumstances in her life which could not be explained by Western Astrology alone. She practices the Parashara System, and stays with the traditional seven ancient planets. She has studied personally with Punditji Mahesh Shastriji of mypanchang.com, Dennis Flaherty's correspondence course, tutoring with Penny Farrow, courses by James Kelleher, and finally through hours of individual study from a set of about 40 sundry books on Vedic Astrology purchased from Dennis Flaherty a week after having received James Braha's books (back in 2009). She will always consider herself a life-long student of Jyotish, considering how vast and deep this knowledge is. She continues to learn through the courses given by James Kelleher, a wonderful Jyotish Guruji!